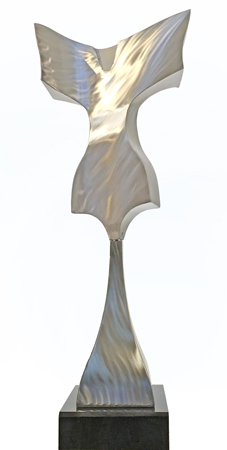 Before I dive into the particulars of my proposal, I'd like to thank the members of the selection committee at

Georgia College for allowing me the opportunity to make my pitch. The themes expressed in the notes forwarded

by Anne Tracht as to what you'd like to see expressed in the art were helpful as I worked on the proposal. In particular,

those that emphasized the history of Georgia College's role in women's education, and the on-going priority of

preparing women for leading roles in both the sciences and the arts resonated with me.

combined with the joy movement inspires - both in those who evince it, and in those who witness it. I once watched

with the lead dancer as composed, and as serene as when she began. I thought, "That's a person entirely at home

in her own skin." Just as a dancer embodies both the liberating abandon of extreme motion and the discipline

of controlled form, these revolving sculptures for me embody those twinned energies. Both

are helpful in creating anything of lasting beauty.

At the scale proposed Spreading Her Wings will also present a solid, powerful presence. When I think about female

empowerment, I think that's the key quality that can do with more emphasis - being boldly present - especially in a

in a celebration of form and motion.

As for the formal elements of the sculpture and how it fits into this particular setting, the site has some inherently strong organic

contouring in the concrete work that defines the planting bed and walkway. That contrasts with the rectilinear backdrop of the

wall casting a shadow over the site. I propose to extend the curving lines vertically in a bid to blur the visual divide. And while color

can be one strategy to stand out from the earth reds and muted grays predominate in the environs, I'm partial to the light-refracting

qualities of stainless steel which, especially when set in motion, presents a constantly shifting display of shimmering surface

reflections influenced by every color in the adjoining landscape.

One theme in my work I understand you were attracted to was sculpture composed of many, smaller wind

catching elements spread on an armature. But in this setting I strongly feel that a bold, solid shape is the best way

to compete with the background visuals. Indeed, I have a plan to use the wall as a surface to catch light as it plays

off the sculpture, especially at night. In a short video at the bottom of the page I show how reflected light plays on the

surroundings with two sculptures in different settings. Below that, I've staged a small scale simulation of how I imagine

a similar sculpture to the proposed might be lit to dramatic effect in your setting. 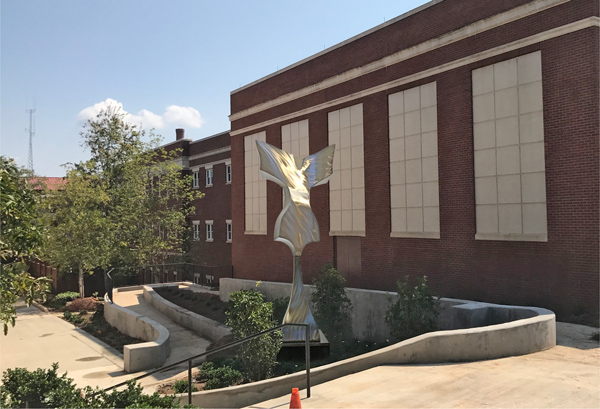 I’m thinking the sculpture should scale to about 12 feet tall with a 4-5’ base and a 7-8’ tall kinetic element.

Any additional height that could be generated by a raised pedestal would be great, and it will get the piece up into

the sunlight for a bit longer each day. And, of course, there’s

no denying sheer scale for impact. 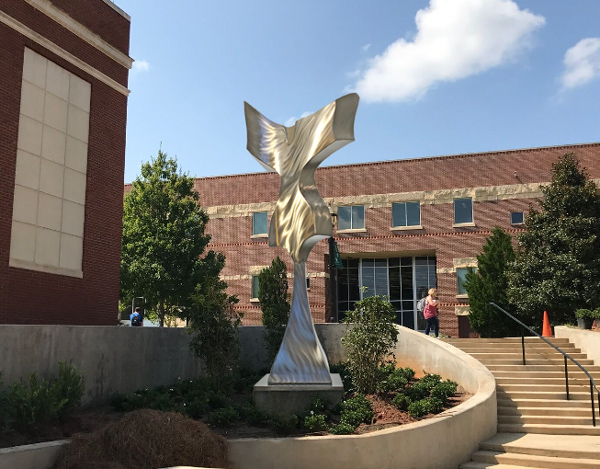 Again, thank you for the opportunity to make this proposal, and should you elect to move forward with it I'll

commission like this one to fruition. You can find examples of this from other commissions on my Making Sculpture

All my best, - Mike Roig