with an eye to creating a signature sculpture to grace the adjoining plaza, the visual qualities

that stayed with me and informed my thinking were the layered patterns of multicolored brick,

gridded steel, and the play of each reflected in the windows of the adjoining buildings.

textures. After an afternoon of playing with paper and scissors I found a shape that pleased me by

echoing all the rectagularity of the building elements, while also starting to introduce a contrasting 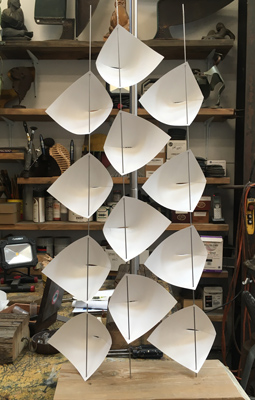 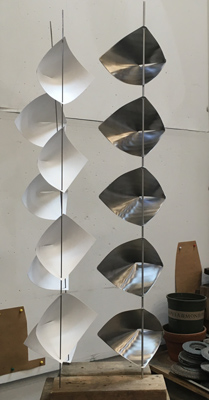 These shapes are created from a square with a wedge removed from one corner, and then pulling

that gap closed. It's interesting how that simple transformation takes a static square and transforms it into

a dynamic, much more organic form. It also, of course, provides the basic aerodynamic contouring that will

ultimately propel the kinetics of the sculpture.

I hadn't in the past. So while Mitchell suggested I may get by with sketching my ideas for an initial

proposal, I knew I needed work out in three dimensions the basic mechanics of what I was seeing in

my mind's eye. Thus the model sculpture pictured at the top of the page and in the video below.

Three independently turning armatures, each moving in counter-rotation to its neighbor, and all turning on a

I offered this model to be viewed as my sketch, and the opening gambit for conversation about further

refinement. Indeed, I already saw some ways I might like to alter the design in its next iteration - mainly

by taking some of the rigid geometry out of the supporting armatures. Fortunately the feedback I got

fell in line with that inclination. With the basic kinetic action of the sculpture now well represented, I felt I could

now suggest the refinements I would propose in a two-dimensional rendering.

There were three basic elements to the conversation that developed from the model. The first was a request to think about

creating an up-sweep to the support arms of the kinetic topper. The suggestion was made that this upward trajectory might

help convey a symbolic trajectory of thought and purpose that was being fostered at the school. I liked the idea, and indeed it

was there in my rudimentary sketchings as I first thought about this concept. It also reminded me of a thought

process that went into a sculpture I made for Georgia College called "Spreading Her Wings." There a similar upsweep

to the form lent a symbolic aura of launching into a bright future with abandon. 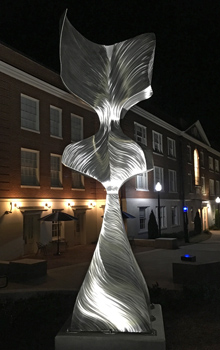 The second suggestion was whether the base might taper upwards rather than the downward tapering of the 3-D model.

Again, here, the thought may have been to enhance the feeling of upward trajectory, but it would also suggest a relationship

to another landmark of the Duke campus, the Duke Chapel spires. 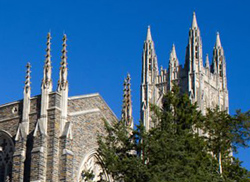 When I looked at them on line I was drawn to the secondary spires, with the repetive embelishments that

segmented the spires in their climb. I decided to echo that in the sculpture's base by segmenting the form with

an insetting groove. This would also allow me to address the third suggestion in an interesting way, that of having a

contrasting color in the materials in the base.

Stainless steel turns colors when you heat-treat it, starting at about 600 degrees fahrenheit. Below you will see

several small pieces with this patina. You can see the variation each piece displays, and my intention is to

create a separate panel for each facet of the base and attach them to the surface with rivets. I Photoshopped

segments of these tiles onto the rendered sculpture's base to illustrate how this might look. This will again

luster of the stainless steel. 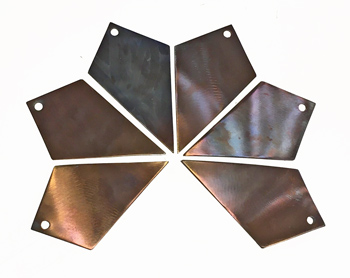 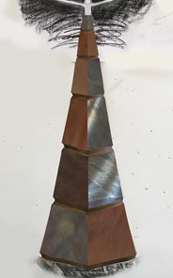 That luster can add quite a dramatic element to the nighttime drama of a well-lit sculpture, as you can see in the

above "Spreading Her Wings" picture. That drama is furthered by the reflected light thrown on the surrounding

architecture, reflections that move and dance when the kinetic elements are in motion.

Finally, I'd like to address the more extensive conversations Mitchell and I have had about the symbolic elements

of the sculpture. These have ranged form those already mentioned, to a delight taken in the multiple hues of the

heat treated panels because they might make subtle reference to the diversity in the student body. From my writing

the visuals of the setting, and the properties the materials themselves can create. But from my earliest days as

an artist I have always had great respect for the space art creates for creative interpretation.

Indeed, I believe it is one of the great callings of art, and especially more abstracted kinds of art, to draw from the

viewer an engagement of their own creativity. Whether this be to read meaning into the arrangement of elements, or

to inspire a tangential flight of imagination, or simply to engender a moment of wonder--one where the mind is momentarily

stunned into the quiet of pure presense.

It is my hope to create a sculpture that can elicit all these kinds of responses.